Irritable bowel syndrome (IBS) is a functional bowel disorder in which abdominal pain is associated with defecation or a change in bowel habit. Approximately 20% of the general population fulfil diagnostic criteria for IBS but only 10% of these consult their doctors because of gastrointestinal symptoms. Nevertheless, IBS is the most common cause of gastrointestinal referral and accounts for frequent absenteeism from work and impaired quality of life. Young women are affected 2-3 times more often than men. Co-existing conditions such as non-ulcer dyspepsia, chronic fatigue syndrome, dysmenorrhoea and fibromyalgia are common. A significant proportion of patients have a history of physical or sexual abuse.

Most patients seen in general practice do not have psychological problems but about 50% of patients referred to hospital meet the criteria for a psychiatric diagnosis. A range of disturbances are identified, including anxiety, depression, somatisation and neurosis. Panic attacks are also common.

Patients with diarrhoea as a predominant symptom exhibit clusters of rapid jejunal contraction waves, rapid intestinal transit and an increased number of fast and propagated colonic contractions. Those who are predominantly constipated have decreased orocaecal transit and a reduced number of high-amplitude, propagated colonic contraction waves but there is no consistent evidence of abnormal motility.

IBS is associated with increased sensitivity to intestinal distension induced by inflation of balloons in the ileum, colon and rectum, a consequence of altered central nervous system processing of visceral sensation. This is more common in women and in diarrhoea-predominant IBS.

Between 7 and 32% of patients develop IBS following an episode of gastroenteritis, more commonly young women and those with existing background psychological problems. Others may be intolerant of specific dietary components, particularly lactose and wheat. Abnormalities of gut microflora leading to increased fermentation and gas production and minimal inflammation have also been postulated. Some patients have subtle, histologically undetectable mucosal inflammation, possibly leading to activation of inflammatory cells and release of cytokines, nitric oxide and histamine. These may trigger abnormal secretomotor function and sensitise enteric sensory nerve endings.

The most common presentation is that of recurrent abdominal pain. This is usually colicky or ‘cramping’, felt in the lower abdomen and relieved by defecation. Abdominal bloating worsens throughout the day. The bowel habit is variable. Most patients alternate between episodes of diarrhoea and constipation. Those with constipation tend to pass infrequent pellety stools, usually in association with abdominal pain or proctalgia. Those with diarrhoea have frequent defecation but produce low-volume stools and rarely have nocturnal symptoms. Passage of mucus is common but rectal bleeding does not occur. Despite apparently severe symptoms, patients do not lose weight and are constitutionally well. Physical examination is generally unremarkable, with the exception of variable tenderness to palpation. 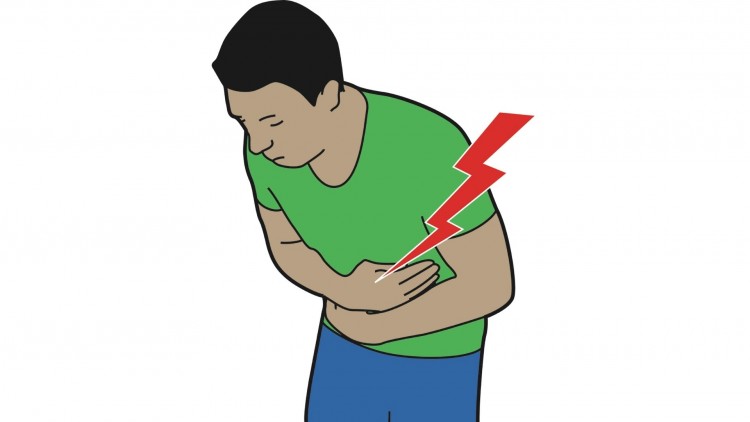 Features supporting a diagnosis of IBS

The most important steps are to make a positive diagnosis and reassure the patient. Many patients are concerned that they have developed cancer, and a cycle of anxiety leading to colonic symptoms, which further heighten anxiety, can be broken by explanation that symptoms are not due to organic disease but are the result of altered bowel motility and sensation. In patients who fail to respond to reassurance, treatment is tailored to the predominant symptoms.

Patients with intractable symptoms sometimes benefit from several months of therapy with amitriptyline (10-25 mg orally at night). Other drugs may overcome abnormalities of 5-HT signalling which have been identified in some IBS patients. These include 5-HT4 agonists. Active anxiety or affective disorders should be separately treated. Psychological interventions such as cognitive behavioural therapy, relaxation and gut-directed hypnotherapy are reserved for the most difficult cases.

How To Manage Stress During Life in College with…