The disorder has also been called hospital addiction, polysurgical addiction producing the so-called washboard abdomen, and professional patient syndrome. The essential feature of patients with the disorder is their ability to present physical symptoms so well that they can gain admission to, and stay in, a hospital. To support their history, these patients may feign symptoms suggesting a disorder involving any organ system. They are familiar with the diagnoses of most disorders that usually require hospital admission or medication and can give excellent histories capable of deceiving even experienced clinicians. 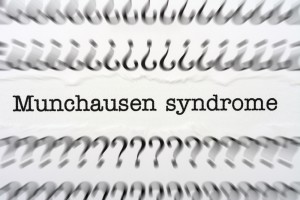 Clinical presentations are myriad and include hematoma, hemoptysis, abdominal pain, fever, hypoglycemia, lupus-like syndromes, nausea, vomiting, dizziness, and seizures. Urine is contaminated with blood or feces; anticoagulants are taken to simulate bleeding disorders; insulin is used to produce hypoglycemia; and so on. Such patients often insist on surgery and claim adhesion from previous surgical procedures. They may acquire a grid iron or washboard-like abdomen from multiple procedures. Complaints of pain, especially that simulating renal colic, are common, with the patients wanting narcotics. In about half the reported cases, these patients demand treatment with specific medications, usually analgesics. Once in the hospital, they continue to be demanding and difficult. As each test is returned with a negative result, they may accuse doctors of incompetence, threaten litigation, and become generally abusive. Some may sign out abruptly shortly before they believe they are going to be confronted with their factitious behavior. They then go to another hospital in the same or another city and begin the cycle again.

Unknown, there may be a background of childhood sexual abuse or childhood emotional neglect. Probably more common in men and those with a nursing or paramedical background.  Association with personality disorder. Production of psychiatric symptoms associated with borderline PD, CSA or emotional abuse.

There are no validated treatments. Patients are often reluctant to consider psychiatric assessment and may leave once their story is questioned. Management in these cases is directed towards reducing teratogenic harm caused by inappropriate treatments and medications.

Direct challenge: Easier if there is direct evidence of feigned illness; the patient is informed that staff are aware of the intent to feign illness and the evidence is produced. This should be in a non-punitive manner with offer of ongoing support.

Indirect challenge: Here the aim is to allow the patient a face-saving ˜way out, while preventing further inappropriate investigation and intervention. One example is the double bind if this doesn’t work then the illness is factitious.

Systemic change: Here the understanding is that there is no possibility of change in the individual and the focus is on changing the approach of the health care system to assessing them in order to minimize harm. These strategies can include dissemination of the patient’s usual presentation and distinguishing marks to regional hospitals, black-listing, Munchausen’s registers, etc. As these strategies potentially break confidentiality and can decrease the risk of detecting genuine illness, they should be drawn up in a multidisciplinary fashion involving senior staff.